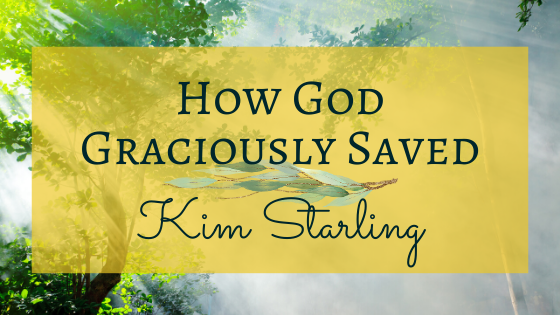 Below is the testimony of a dear sister, and listener, who has been an encouragement to myself and many others in the Tulips & Honey Hub Facebook Group. Recently she shared her testimony with me, and agreed to allow me to share it here. I’m thankful for her boldness, as it is rarely easy to openly discuss our past selves. The old man is dead, and looking back on him we can often feel like we’re watching someone else’s life, but it can be edifying to share God’s grace in forgiving us for that old life. I hope that it will also be encouraging to those of us that have unsaved relatives we’ve prayed for, sometimes for years. I want to thank Kim for all she has done to bless me and others, and for sharing her testimony. At the end you’ll see a video of her baptism, let us rejoice in the saving work of Christ. In Him alone we find our only hope to be forgiven of our sins.

I was adopted as a baby but growing up was full of verbal and physical abuse. I didn’t feel safe at home or school, I was bullied everywhere I turned. Growing up I went to church but God wasn’t present in my home. I tried to please my family anyway I could gain their love and affection. I was involved in a campus ministry in high school called Fellowship of Christian Athletes. In 2000 at a high school retreat I walked down the aisle and first considered myself a Christian, even though I didn’t know what it meant to follow God except I did not want to go to hell. I began attending a charismatic church and followed and attended conferences of teachers such as Beth Moore, Benny Hinn, Paula White, and teachers at Brownsville Revival School of Ministry. I began to believe that because I was going to church, active in FCA, spoke in tongues, had various experiences within the charismatic church that was made me a Christian. By my senior year in high school, I was leading Bible studies and was captain of FCA. However, I still loved my sin and there was no difference in my life before I professed Christ, and after, except for the works I was hoping that would save me as I was being taught. In college, I continued my involvement in FCA. Around 2004 or 2005 I met a friend of mine at a college retreat. When I made a trip down to visit her we went to the college group with her church, Cornerstone Baptist Church in Oviedo. The pastor was going over the book Charismatic Chaos by John Macarthur and that was the first time I heard of what I had believed and the Brownsville school that I had visited was a false gospel. This shook my world, everything I believed, and caused me to become upset and silent.

In 2006 I swore in and joined the US Army as an MP. My friend would encourage me to find a biblically sound church in Tallahassee when one couldn’t be found I moved to Orlando in 2007. One day I thought I had understood the gospel and had repented of my sin. In June of 2007, I was baptized. Outwardly I tried to conform but there was no fruit of repentance in my life My friends would point out sin to me but I was prideful and apathetic, I would make excuses for the sin I was committing. About October of 2007, I moved back to Tallahassee due to a temporary duty assignment in Italy. After Italy, I returned to Tallahassee and entered into a relationship that was flirting with the line between sex and foreplay which ended about a month before I deployed. Shortly after I returned from Italy I received my orders to be deployed to Iraq. During my training for my deployment, I began talking to a woman on a Christian chat site which became a homosexual relationship. I also remained in touch with various people at Cornerstone, where I am attending now actually. Toward the end of the first month in Iraq, I was injured.

Once I was back stateside I would isolate from everything and everyone except for my family, my friends from Cornerstone, and the woman I was speaking with and seeing on Skype all the time. There were times my friends would ask about my status on Skype, my relationship with God, and going to church. I would tell them of my desire to isolate and she would ask me about the profession I had made and baptism. Due to her confronting me about my sin and being unwilling to repent I pushed her away. Because of how I thought it was unloving and not understanding why I wanted to isolate I would slander her to others. Every year until 2015 I would travel to Canada to visit my girlfriend. On one of my initial trips to see her we exchanged rings and said we were married even though she was already married with children who knew nothing of our sin. Due to trauma from war and childhood in April 2017, I got a service dog (which was at suggestions of other veterans that had gone through the war and had the same issues I did) and after that, I felt like I had to keep my promise to God and go back to church. I would go only when it was convenient and when I didn’t have to explain it to the woman I called a wife. That July I made my first trip back to Cornerstone in Oviedo for the woman’s conference with Ollie and still professed to be a Christian. By August I began being uncomfortable with the soft preaching or when I approached the pastor about being unsure of my salvation he prayed for me but did not mention anything about repentance or sin in my life but all was ok because we had prayed. I

n November 2017 I found a reformed church in Tallahassee called Grace Church of Tallahassee. During this time I began reaching out to my old friend who I pushed away again and she would graciously hear my questions and uncertainties I had about if I could come to Christ and repent. She would tell me today is the day of salvation, to read the book of John, and listen to Paster Marc at Cornerstone preach through the book of John. I would still make excuses for not going to church. Between January and March between hearing the sermons by Pastor Marc through John, reading Hard to Believe by John Macarthur, listening to the pastor at Grace Church of Tallahassee preach through Luke, and reading through John I think it was in March when my sin, depravity, understanding of the gospel and repentance for the first time I began being broken and downcast. I would come home from church before I would begin work there would be tears that would flow and I would get on my knees pleading with God to have mercy on me and grant me repentance. One day I prayed that I know the cost, I don’t care about the cost I want to follow Him. After that I told the woman I could no longer be in the relationship with her, I deleted all the photos of her and that I had with her. One day she asked me if I regretted the relationship and without hesitation I said I do regret it because of the offense it is to my Lord first and foremost and it was also sinning against her and her family. Now by God’s grace, I am living in Orlando again and attend Cornerstone and my life is completely different.